The paintings face my fear of being distant from family, Japanese culture, and its language. The works act as a catalyst to help me feel closer to these concerns. A sense of being physically and emotionally distant began when my family and I moved to America in 2001. After the deaths of my grandparents in Japan in 2020, I was unable to attend their funerary services in Japan due to travel restrictions. I started to imagine an invisible boundary between myself, Japanese culture, and the idea of ‘home, which was formed by my lack of familiarity in Japanese Buddhist funeral rites and not knowing the customs of how to honor the deceased. I imagine the abstract shapes as spirits and formless bodies who exist in a non-linear space. The abstract imagery is paired with Japanese monyō symbols (traditional Japanese patterns and symbols). The monyō I reference mainly signify nature, which has allowed me to recognize and latch onto reality, and to suggest the change of seasons; the passing of time where life and death exist between seasons. In this body of work the paintings fill an emotional void, honor, and remember the deceased, while letting me find new ways of feeling closer to the time I spent growing up in Japan.

The shape of a teardrop is the same as a raindrop, and they both have associations with a somber feeling. I wanted to use the shape of the tear/raindrop as the primary forms in the imagery to suggest the sadness I sometimes feel from being away from Japan. In the center is the largest shape and darkest hue, which is meant to look hollow. The other shapes are placed in areas that suggest to hug or fall around the center. There are also symbols of hydrangea that hide beneath the layers of paint that remind me of the rainy seasons in Japan.

The composition of the painting felt full and empty simultaneously; it has numerous shapes and an open center. I saw the oval shape in the middle as a chrysalis being surrounded by smaller shapes that hides and protects it. There are butterflies who hover around, and some layered within the chrysalis. In the painting the butterflies are gathered to where they originated from, the chrysalis, their previous stage in life, and a former ‘home’. I often look back to moments of change and the different homes I’ve lived in; moving from Japan to the U.S, then Hawai‘i to California, and all the small moves in-between. The connection between changes in environment and personal growth has been invaluable to the ways I approach painting. By making a ‘home’ for the butterflies that also creates space for myself to feel grounded in.

In the painting, False Strawberries, I used simplified images of the sakura blossoms placed throughout the center. Around the outer edges of the image, there are the false strawberries, a type of weed that grows in Japan, curving and twisting around the sakura blossoms. Both the sakura and false strawberry are synonymous with springtime in Japan. The symbols in the painting recall the months spent in Tokyo, Japan from the winter of 2021 to the spring of 2022.

A Conversation with Orchids

The organic shapes in A Conversation with Orchids occupy a large portion of the painting. I wanted the forms to cluster together and appear as if they are either merging or separating from one another, forming a connection. Within the transparent red background, I have included orchid symbols pained as an outline. The orchids float around inside and outside the shapes which adds another layer to the relationship with the organic forms. I think of all the visual elements having an inaudible conversation amongst each other. I see the orchids as ojiīcah and obaāchan, which is associated with my memory of seeing orchid flowers in their home. The central shapes are ways I’d conceivably communicate with them in the afterlife in wordless motions.

Waiting on the Roof with Butterflies

One night I had a dream of a painting; a white line forming a circle over a blue square, this was vivid and serene. I wanted to recreate the image from the dream and completed Waiting on the Roof with Butterflies. While working on the painting I also read that in Japanese Buddhist belief the soul of the deceased wonders the house or resides on the roof during their period of memorial rites. I started to imagine the circle in the center as the full moon from the perspective of the soul of the deceased, who is gazing at the moon with butterflies to keep them company.

Acrylic and iridescent paint on canvas | 2022

Plum blossoms can be seen during the winter at a particular time, right before or overlapping when the cherry blossoms flower in Japan. I painted the plum blossoms to remind me of the subtle transition of season in Japan, and how a floral symbol could represent change. Additionally, by using dark blues and greys I wanted to present a time at night. 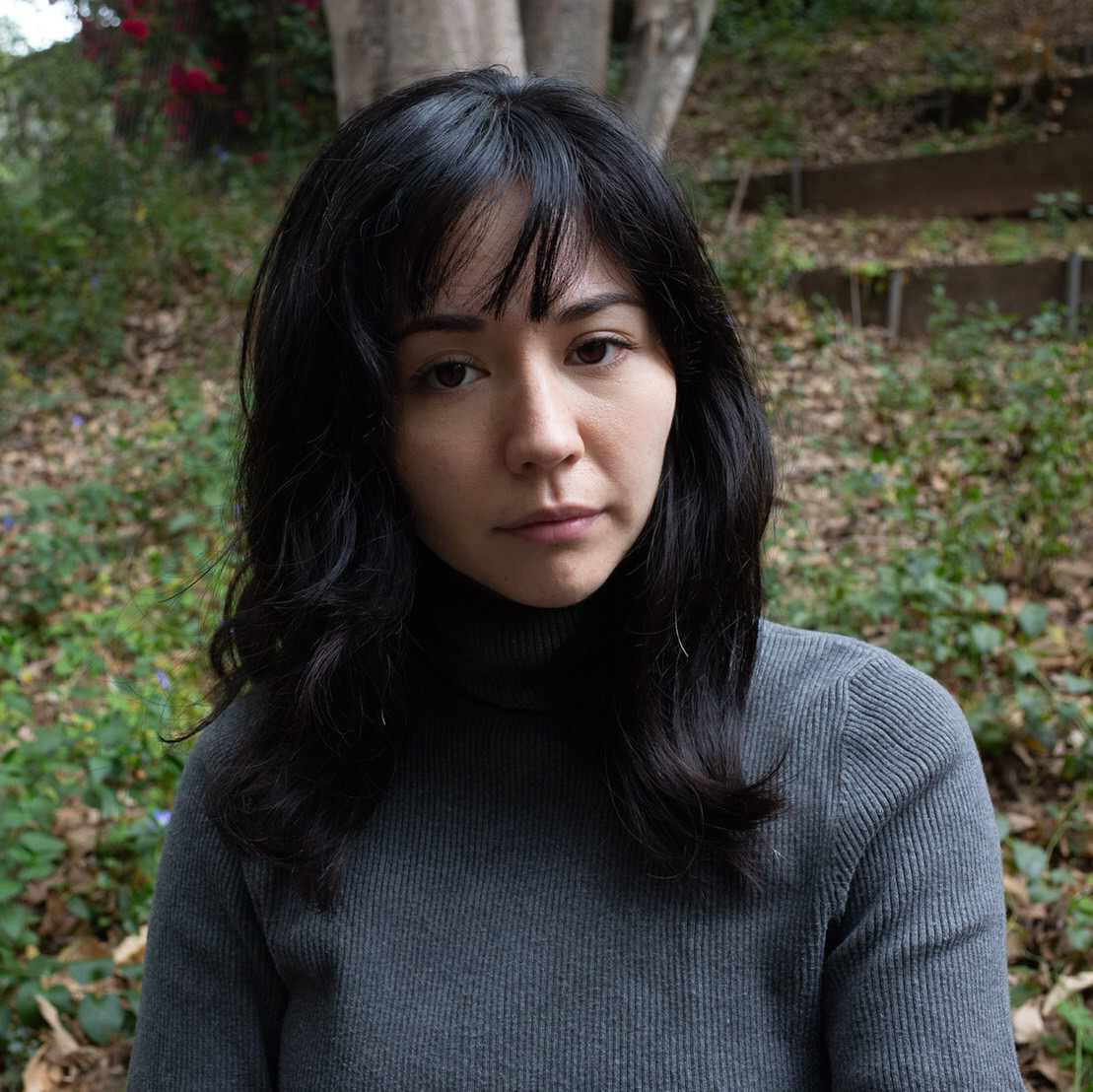 Alina Kawai is a visual artist born in Hyōgo, Japan. In 2021 she received a MFA from the University of California, Santa Barbara, and in 2016 received her BFA from the University of Hawai‘i at Mānoa, emphasizing painting. Many of her artworks focus on color, form, and symbols, which inquire how one is connected to a broader culture, also becoming an introspective quiet space. Kawai has co-curated a virtual exhibition, Why Are You Painting? At the Honolulu Museum of Art in 2020. Additionally, Her painting is in the permanent collection of the Hawai‘i State Art Museum and Ke Kilohana Building in Hawai‘i.