As an Asian American man living in the Midwest, the artist has encountered various levels of racism when first entering an establishment—ranging from subtle feelings of invisibility to being eyed with suspicion or even disdain. That is, until his Caucasian partner appears by his side. This piece is a tongue-in-cheek commentary on the disarming sense of relief whenever he is no longer considered a threat.

“In dedication to my partner, my protector, my shield from stereotypes, prejudice and racism.” – Jave Yoshimoto

A Legacy on the Bayou

Originally commissioned for the Oriental Laundry chain owned by a Chinese American businessman named Charles Tung (1894-1938), the building was one of many “Oriental-style” structures that the architect Edward F. Sporl (1881-1956) designed for Tung throughout the 1920s and 1930s. However, this is the only example left standing—a feat considering the once-thriving New Orleans Chinatown no longer exists. Having gone through different iterations through the years, today it is home to the Pagoda Café, a brunch stop the artist frequented during his residency at the Joan Mitchell Center in 2019. Encapsulated into a banjo, the legacy of Tung’s laundry chain is as Americana as bluegrass music.

This house box edition is intentionally scaled as an invitation for viewers to intimately experience the piece and its subject matter. This close encounter is meant to draw you into the scene of a child eating a meal in the foreground and of a group playing basketball in the background. These mundane activities however, are juxtaposed against their stark surroundings where an armed guard stands watch at the threshold of a doorless entryway. It is an unsettling view where the private is made public. Peering through the window, we ourselves become complicit in their surveillance.

While driving through the vast landscape of Wyoming, the artist came across poster remnants of a Civilian Exclusion Order, one of over a hundred different orders following Franklin D. Roosevelt’s Executive Order 9066 (February 19, 1942) which set into motion the incarceration of more than a hundred-thousand Japanese-Americans into desolate prison camps throughout the western states. Listed are detailed instructions for their evacuation and relocation. The paper airplane is a recurring motif symbolizing innocent lives that can be found in many of the artist’s artworks.

At the time this piece was created, Wal-Mart’s online marketplace was offering more than a dozen canvas prints of historic photos of Japanese Americans unjustly incarcerated in internment camps during World War II. These posters were advertised as “the perfect Wall Art for any home, bedroom, playroom, classroom, dorm room or office workspace.” One such photo was of a small child awaiting deportation to one of the ten “prison camps.” Another was of a group of interned Japanese American women standing together as shown here. The pin location icon and the cell phone frame a critique of the distancing lens through which our tech-savvy culture has come to experience past and current human crisis.

“I’ve never really felt like I belonged anywhere, so my travels are about me searching for something, which is why I painted the Godzilla series. In the movies, wherever Godzilla goes, he gets attacked, so I imagine he’s the loneliest guy in the world. I’m basically painting myself as Godzilla traveling to different parts of the country. And then the Godzilla series turned into the disaster series. Godzilla has now become my compositional signature rather than a tool to send a message. It’s also more accessible because people see Godzilla and think it’s funny. But when they actually look closer at my paintings they realize this is serious stuff.” – Jave Yoshimoto (edited from Guernica artist interview with Jill J. Tan; June 15, 2016) 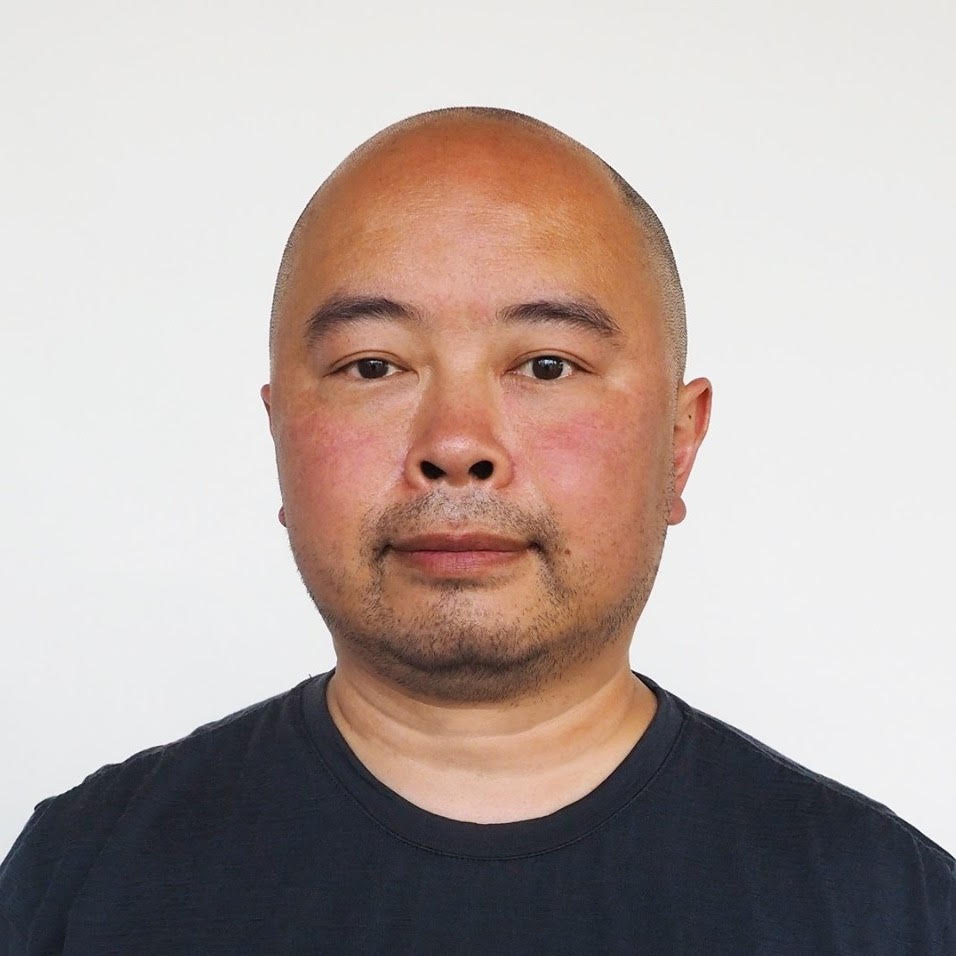 Jave Yoshimoto is an artist and educator of multi-cultural background.  He was born in Japan to Chinese parents and immigrated to the United States at a young age. He has since traveled and lived in various parts of the country which influenced his artistic practice. He believes in creating socially conscious art and staying true to his authentic self. Similarly, his teaching philosophy encourages students to explore their personal identity and experiences to inform their creative compositions while developing their technical skills. Yoshimoto has received his Bachelors from University of California Santa Barbara in Studio Art, his Post-baccalaureate Certificate in Painting and Drawing and Masters of Art in Art Therapy at the School of the Art Institute of Chicago, and his Masters of Fine Arts in Painting at Syracuse University.

He has experience working as an art therapist/mental health professional in Chicago, IL, a painting instructor for Syracuse University, and as a teaching artist in Seattle, WA. He has worked with various age groups and diverse ethnic populations in both rural and urban settings. As an artist, he served as an artist-in-residence at various artist colonies across the United States. Yoshimoto has been featured in multiple publications and websites and has received a letter of recognition from the United Nations. He has been awarded the Joan Mitchell Foundation's Painters and Sculptors Grant in 2015 and exhibited works nationally and internationally. He has also shown in solo exhibitions in New York, Chicago, IL, Portland, OR, Seattle, WA, Alva, OK, Tulsa, OK, Fort Worth, TX, Lincoln, NE and Omaha, NE. Yoshimoto currently works as an Associate Professor of Art at University of Nebraska at Omaha.