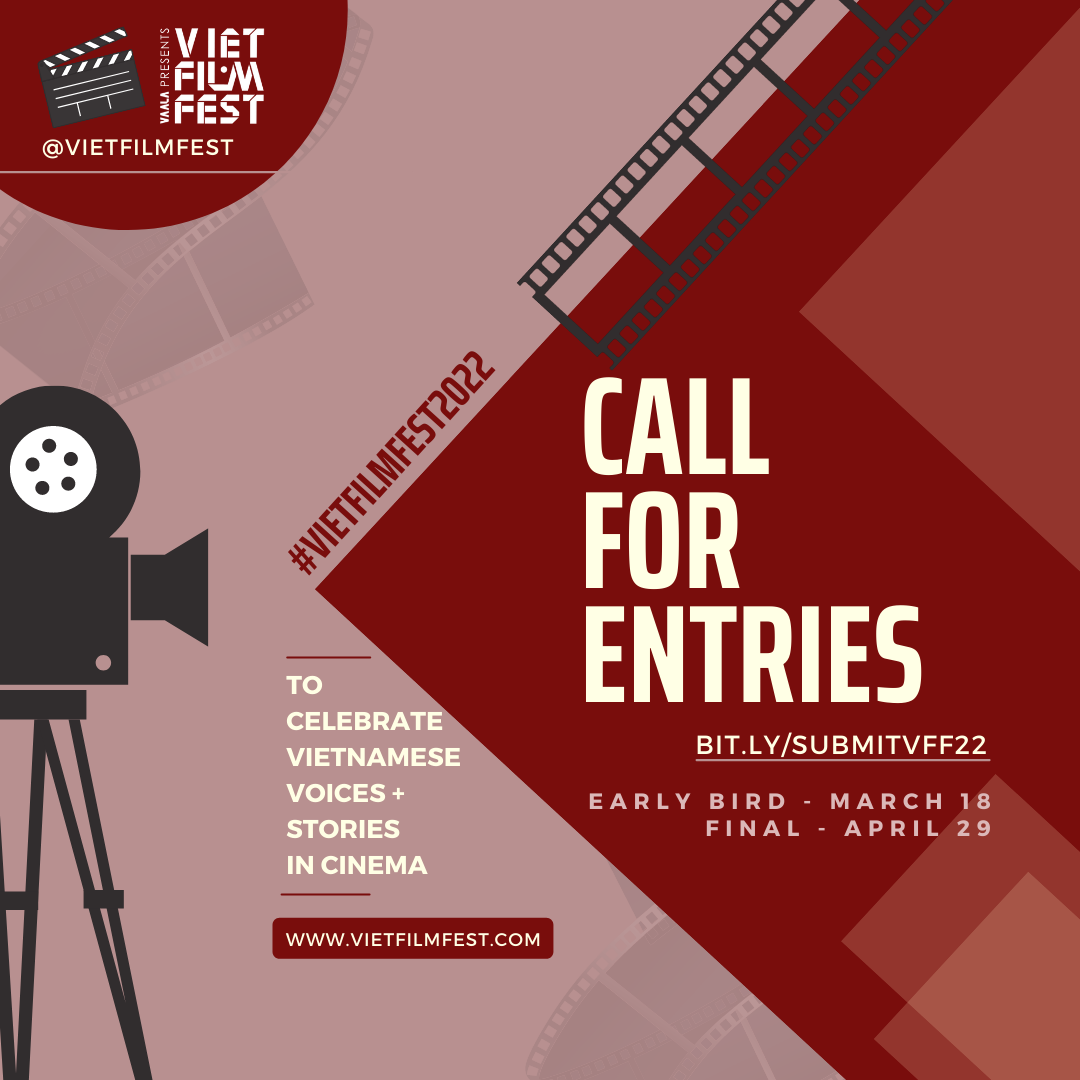 February 7, 2022 — Orange County, CA — The Vietnamese American Arts & Letters Association (VAALA) is proud to announce that Viet Film Fest (VFF) will occur from October 1-15, 2022! Following its first-ever virtual return last year, Viet Film Fest 2022 will be offered through an online streaming platform in a movies-on-demand environment with in-person screenings for select films (following public health/safety directives). The combination of virtual and in-person screenings at Viet Film Fest expands opportunities for filmmakers and audiences, around the world, to experience and discuss independent artistic work. Continuing their roles from Viet Film Fest 2021, Digital Director Tony Nguyen and Artistic Director Eric Nong will bring a new level of technical expertise and creative vision to celebrate Vietnamese voices and stories through the universal language of film. The 13th edition of the largest international Vietnamese film festival outside of Vietnam will include a special opening and closing weekend setlist, free community screenings for youth and seniors, exclusive interviews and panels with industry professionals, and more!

“The return of Viet Film Fest in a hybrid format ensures the safety and vitality of our audiences to engaging with films that revitalize the Vietnamese/American identity and experience. Viet Film Fest provides more nuanced plotlines and multi-dimensional representation that invites cultural and artistic connection through the powerful lens of filmmaking,” says Tony Nguyen, Viet Film Fest Digital Director.

“As a space for visual storytelling, Viet Film Fest offers a glimpse into the transformative power art has to build empathy and understanding towards an inclusive community by showcasing cinematic masterpieces from established and emerging filmmakers. As we continue to navigate the uncertainties of the pandemic, our commitment to uplifting Vietnamese voices remains untouched to reimagine intercultural and intergenerational dialogue, creative expression, and collective celebration,” says Eric Nong, Viet Film Fest Artistic Director.

Viet Film Fest 2022 Artwork by Chi Leong
Viet Film Fest believes that collective healing through the arts, in particular the universal language of film, is crucial in navigating the junior year of the pandemic. The official theme of the 2022 festival calls for a gentle and caring mindset through self-care that generates into community care. Artist Chi Leong describes the piece as, “soft and quiet with the portrayal of a smaller self in the care of comforting hands” since “being tender is a common coping mechanism from the unpredictable.” 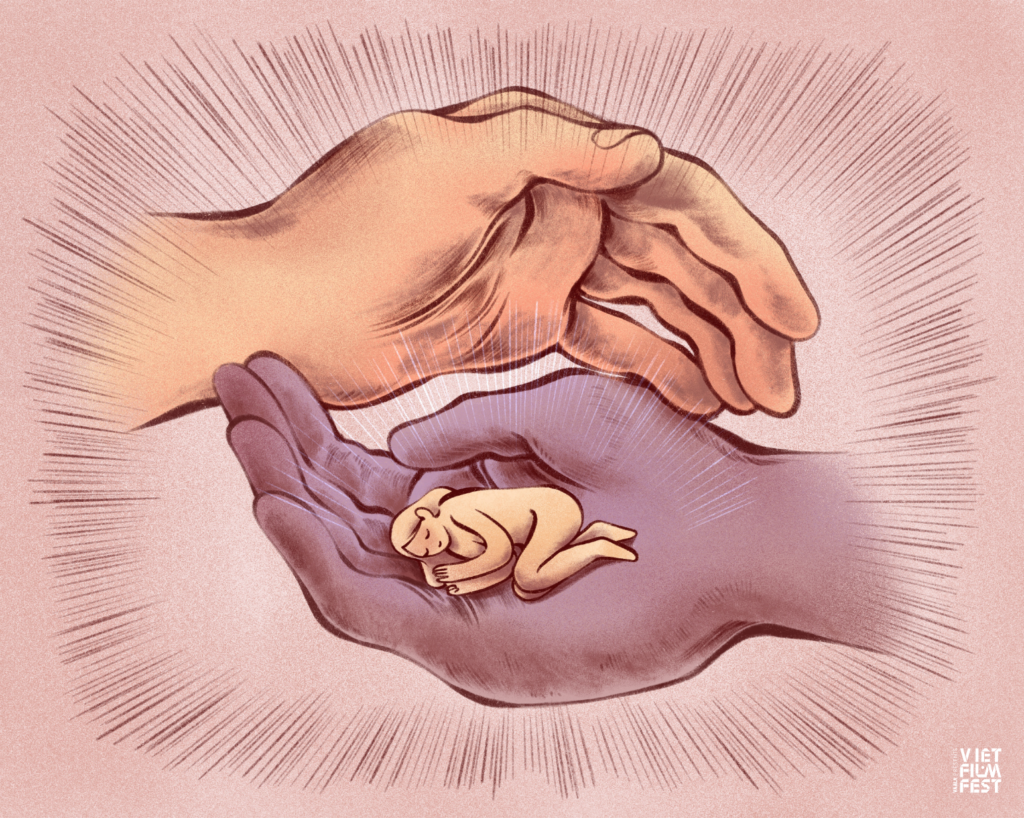 Mission
The mission of Viet Film Fest is to celebrate Vietnamese stories and voices in cinema.

Call for Submission Entries
Viet Film Fest is looking for movies from filmmakers of Vietnamese descent and/or movies that speak to the Vietnamese experience for our 2022 film festival to be held on October 1-15, 2022. If you would like to submit your work to Viet Film Fest 2022, entry forms can be filled out online at bit.ly/submitVFF22. The early bird submission deadline is Friday, March 18, 2022, with a final deadline of Friday, April 29, 2022.

About Chiang (Chi) Leong
A Dallas-based freelance illustrator drawing inspiration from her love of comics, anime, and video games. Chi’s work gravitates toward subjects of emotion and escapism expressed with a focus on detailed line work and soft color palettes. In her free time, she can be found enjoying printmaking, playing Tekken, and taking cat naps.

About Eric Nong
Born and raised in Orange County, CA, Eric Nong is Viet Film Fest 2021’s Artistic Director. He is a self-taught classic film buff who, since 2012, maintains a blog dedicated to movie write-ups. In addition to his passion for film, he has served as a volunteer and writer for Viet Film Fest 2018. Eric was also a part of Viet Film Fest 2019’s Curatorial Committee and volunteered during the 3-day event. Eric has a BA in Political Science from UC Irvine (also attended UC Santa Cruz for the first two years of undergrad); MPP from UCI with a focus on education and poverty alleviation. In his spare time, Eric volunteers his time to teach English to Buddhist monks at Chùa Bát Nhã in Santa Ana, CA.

About Viet Film Fest
Viet Film Fest was created in 2003 by the Vietnamese American Arts & Letters Association (VAALA), becoming its largest program. As the largest international Vietnamese film festival of its kind in the world, Viet Film Fest showcases the best creative work by and about Vietnamese people. Through the universal language of film, Viet Film Fest brings together multiple perspectives to expand the scope and horizons of Vietnamese cinema. Our award-winning films have been screened in numerous cities and countries. For over a decade, the festival has attracted thousands of national and international attention for its stunning showcase of shorts and features submitted from all over the world. As the hub of the Vietnamese movie industry, the festival hosts networking opportunities with prominent directors, media experts, and producers, including Tony Bui (Three Seasons (Ba Mùa)), Charlie Nguyễn (The Rebel (Dòng Máu Anh Hùng)), Trần Anh Hùng (The Scent of Green Papaya (Mùi Đu Đủ Xanh)), Hàm Trần (Journey from the Fall (Vượt Sóng)), and Victor Vũ (Yellow Flowers on the Green Grass (Tôi Thấy Hoa Vàng Trên Cỏ Xanh)).