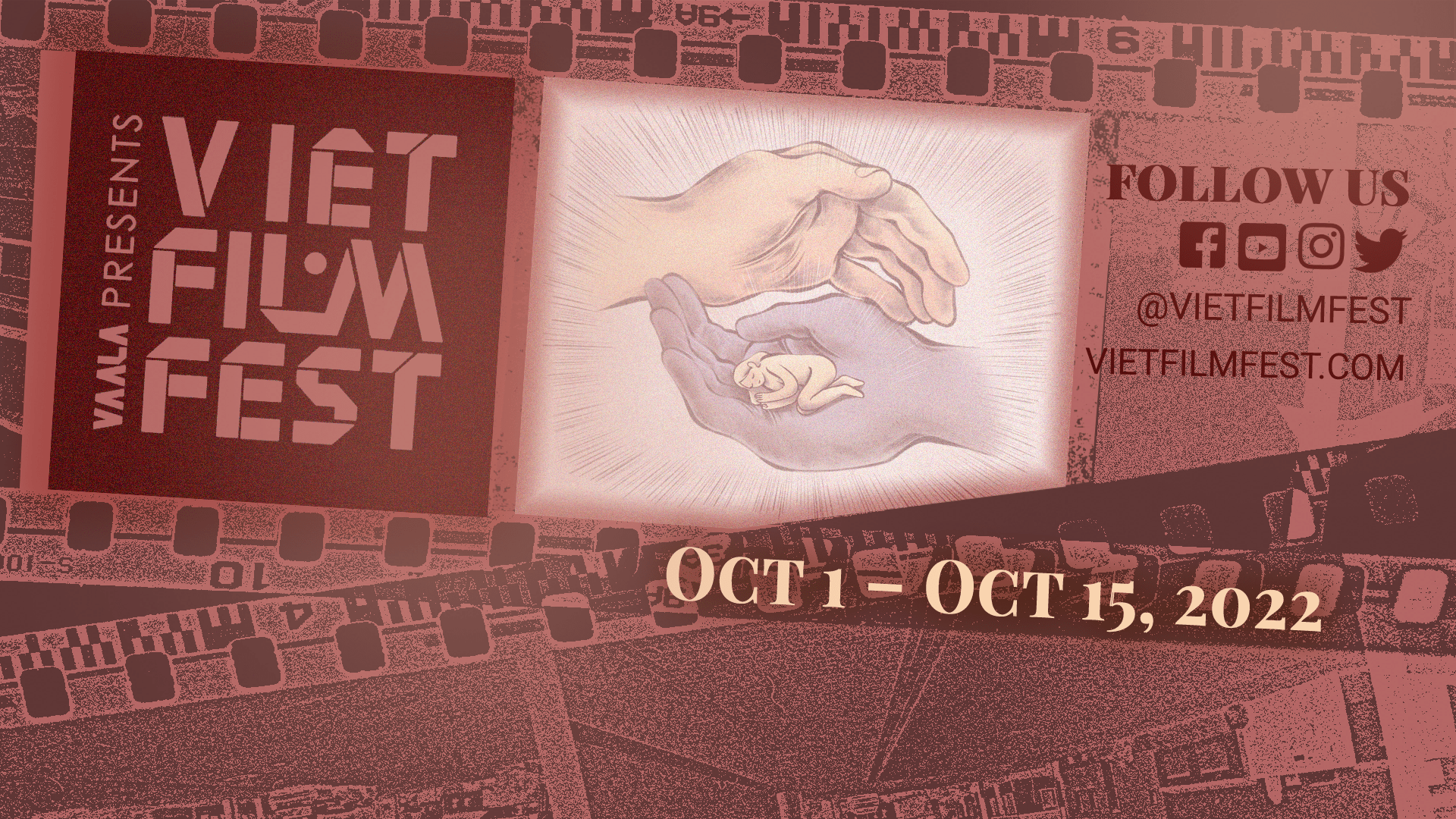 Returning for its 13th edition, Viet Film Fest 2022 showcases a robust program that celebrates Vietnamese voices and stories in cinema

September 8, 2022 – (Orange County, CA) – Viet Film Fest 2022, presented by the Vietnamese American Arts & Letters Association (VAALA), a nonprofit organization that is celebrating its 30th year anniversary in 2022, announces its full lineup for the 13th edition of the festival. The return of Viet Film Fest will provide access to national and international audiences through an online streaming platform in a movies-on-demand environment from October 1-15, 2022, as well as a 2-day in-person screening at Century Huntington Beach and XD on October 7th and 8th. This year’s in-person screening brings Viet Film Fest closer than ever to its home in Little Saigon, Orange County, California.

“It is so exciting for us to bring the festival so close to Little Saigon in a new venue,” said Tran Lee, this year’s Viet Film Fest Events Director. “We have never been more than a few miles away from the heart of Little Saigon and a few streets down from key historical landmarks such as Asian Garden Mall (Phước Lộc Thọ). The festival will be at Century Theater Huntington Beach, a spacious and popular local theater with luxury seating and a large lobby area. We are thrilled to bring the youth and seniors back to the movies again for Community Day as well.”

Viet Film Fest’s hybrid festival will continue to be available in a video on-demand format for audiences outside of Orange County, California, throughout the world, with certain geolocation restrictions for a handful of films. In 2021, Viet Film Fest reached 24 states within the United States and 14 international countries from providing this format of viewership.

Among the 66 films submitted, a curated collection of 12 features and 21 short films were selected for this year’s official lineup. Within the feature films being showcased in this year’s festival, six are North American premieres. The countries of production include Australia, Canada, France, Germany, Vietnam, and the U.S., with English subtitles available.

“After the success of hybrid format from last year, we will again be presenting VFF with both virtual and in-person elements. We are delighted to present this international lineup of films – an eclectic collection of probing documentaries to crowd-pleasing and daring features – to an international audience. Nevertheless, the character of Orange County and Little Saigon are inextricably part of VFF. The expansion of in-person screenings this year deepens our connection to Southern California’s cultural scene,” said Viet Film Fest 2022 Artistic Director, Eric Nong.

The festival will open with Maika – The Girl from Another Planet (Maika – Cô bé đến từ hành tinh khác). Ham Tran’s children-friendly sci-fi movie premiered at Sundance earlier this year and will only be shown in-person at our festival. The movie will be shown in both the original Vietnamese language as well as English dub by a Vietnamese-American cast.

In celebrating Vietnamese voices and stories in cinema across multiple audiences, Viet Film Fest 2022 continues to host free, public screenings known as Community Day. Curated for high school students, “Pulling Through” sees its subjects exploring what it means to be themselves in the face of familial, personal, and societal challenges. Many of the films in “Pulling Through” are coming-of-age films, grappling with art, bullying, romance, tradition, and self-acceptance. Also part of Community Day is “Come Together”, a free short film set for seniors. “Come Together” allows viewers to contend with issues faced by Vietnamese adults – depicted in abstract, based on current events, and in strained familial relationships. The purpose of Community Day is to provide accessibility to the arts across generations.

Documentaries continue to play an important part in this year’s Viet Film Fest. This year, distinguished guest Trinh T. MInh Ha was invited to the festival to showcase What About China?, a film which focuses on harmony in China as a site of creative manifestation linked in common lore to the remote origins of the country’s civilizations. Footage from this documentary was shot mostly in 1993–94 in villages in eastern and southern China. Trinh T. Minh Ha will be paying a visit to Orange County to attend the festival and have a small luncheon to visit the Vietnamese community. Filmmaker, writer, composer Trinh T. Minh-ha is a Distinguished Professor of the Graduate School at the University of California, Berkeley. Her work includes nine feature-length films (including Forgetting Vietnam 2016, Night Passage 2004, The Fourth Dimension 2001, A Tale of Love 1996, Shoot for the Contents, 1991, Surname Viet Given Name Nam, 1989, Naked Spaces, 1985, and Reassemblage, 1982) as well as several large-scale multimedia installations and books.

Other notable documentaries include Children of the Mist (Diem Ha Le) and Jimmy in Saigon (Peter McDowell). Children of the Mist takes place in mist-shrouded mountains of northern Vietnam and focuses on ethnic minorities in the region where girls get married at a very young age. This is often preceded by a controversial “bride-napping,” where the girl is abducted by her future husband on New Year’s Eve. Jimmy in Saigon takes a look at generations after his brother’s death, director Peter McDowell uncovers secrets related to Jimmy’s sexuality and drug use. Jimmy died as a civilian in Saigon during the Vietnam War when Peter was only 5 – through hundreds of his letters and a truth-seeking journey that takes him around the world, Peter gets to know Jimmy and finds peace in his own life.

Viet Film Fest 2022 will close out with the U.S. Premiere of Blood Moon Party (Tiệc Trăng Máu) directed by Nguyễn Quang Dũng. Seven long-time friends get together for dinner. When they decide to share with each other the content of every text message, email, and phone call they receive, many secrets start to unveil and the equilibrium trembles.

Geo-location restrictions (“geofences”) for some film sets may apply. Tickets are subject to availability. All donations received will support Viet Film Fest’s mission to celebrate Vietnamese stories and voices in cinema. Visit www.vietfilmfest.com for more information.

ABOUT VIET FILM FEST
Viet Film Fest was created in 2003 by the Vietnamese American Arts & Letters Association (VAALA), becoming its largest program. As the largest international Vietnamese film festival of its kind in the world, Viet Film Fest showcases the best creative work by and about Vietnamese people. Through the universal language of film, Viet Film Fest brings together multiple perspectives to expand the scope and horizons of Vietnamese cinema. Our award-winning films have been screened in numerous cities and countries. For over a decade, the festival has attracted thousands of national and international attention for its stunning showcase of shorts and features submitted from all over the world. As the hub of the Vietnamese movie industry, the festival hosts networking opportunities with prominent directors, media experts, and producers, including Tran Anh Hung (The Scent of Green Papaya), Tony Bui (Three Seasons), Ham Tran (Journey from the Fall), Victor Vu (Yellow Flowers on the Green Grass), Le Van Kiet (Furie), and Charlie Nguyen (The Rebel).

Founded in 1991, the Vietnamese American Arts & Letters Association (VAALA) is a community-based, 501(c)(3) non-profit organization that seeks to connect and enrich communities through Vietnamese arts and culture. Learn more at vaala.org or join @vaalacommunity on Facebook, Instagram, Twitter, and YouTube.