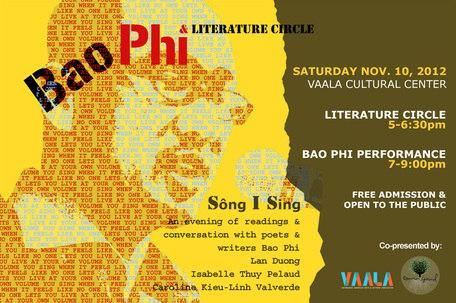 Saturday, November 10
5 – 6:30pm > Literature Circle
7 – 9:00pm > Bao Phi Performance
VAALA Cultural Center
FREE & OPEN TO THE PUBLICDirect from Minnesota, nationally renowned spoken-word artist Bao Phi will give a rare in-house performance at the VAALA Cultural Center. The evening will begin with a Literature Circle of writers that will include Lan Duong, Isabelle Thuy Pelaud, and Caroline Kieu-Linh Valverde who will discuss their recently published books as well as the transformART exhibit currently on show. The discussion will be moderated by Viet Nguyen, USC Associate Professor. The event is co-presented with Common Ground.
About Bao Phi:A Minnesota State Arts Board fellow, two-time Minnesota Grand Slam champion, and a National Poetry Slam finalist, Bao Phi has appeared on HBO Presents Russell Simmons Def Poetry, and a poem of his appeared in the 2006 Best American Poetry anthology. His poems and essays are widely published in numerous publications including Screaming Monkeys and Spoken Word Revolution Redux. He has also released several CDs of his poetry, such as the recently sold-out Refugeography to his newest CD, The Nguyens EP.

He has performed in venues and schools across the country, from the Nuyorican Poets Café to the University of California, Berkeley. He was featured in the award-winning documentary feature film The Listening Project as an American listener who traveled the world to talk to every day people about global issues and politics. He also returned to acting in 2008 with a role in Theatre Mu’s production of Q & A.

In addition to his creative work, he was nominated for a Facing Race Ambassador award in recognition for his community work, and has published essays in topics from Asians in hip hop to Asian representation in video games. He maintains a popular blog for theStar Tribune’s website, which he uses to bring issues and alternative perspectives on Asian American community to light. Currently he continues to perform across the country, remains active as an Asian American community organizer, and works at the Loft, where he creates and operates programs for artists and audiences of color. He was the Coordinating Chair of the National APIA Spoken Word Poetry Summit, 2011.

About the Literature Circle:Lan Duong is an Associate Professor in the Media and Cultural Studies Department at UC Riverside. Her book, Treacherous Subjects: Gender, Culture, and Trans-Vietnamese Feminism (Temple University Press, 2012), explores the films and literature of the Vietnamese and Vietnamese diaspora through the cultural politics of collaboration. Dr. Duong’s second book project, Transnational Vietnamese Cinemas: Imagining Nationhood in a Globalized Era, examines Vietnamese cinema from its inception to the present-day. Her research interests include feminist film theory, postcolonial literature, and Asian/American film and literature. Her critical works can be found in Journal of Asian American Studies, Amerasia, Asian Cinema, Discourse, Velvet Light Trap, and Transnational Feminism in Film and Media. She is also a poet and has been published in Watermark, Bold Words: A Century of Asian American Poetry, Tilting the Continent, and Crab Orchard Review. Dr. Duong teaches classes on Introduction to Cultural Studies, Introduction to Film, Feminist Film Theory, Asian American Women’s Films and Literature, Asian Horror, Southeast Asian Diasporic Literature and Film, Vietnamese Cinemas, Chinese Cinema, Hong Kong Cinema, and The Vietnam War in Film. She has recently received the Fulbright Scholar Award to work on her second book.

Isabelle Thuy Pelaud is Associate Professor in Asian American Studies at San Francisco State University. She is the author of This Is All I Choose To Tell: History and Hybridity in Vietnamese American Literature (2011) and co-editor of Troubling Borders in Literature and Art: Southeast Asian Women in the Diaspora(forthcoming). Her academic work can be found in the Journal of Asian American Studies, Amerasia Journal, The Asian American Literary Review, Michigan Quarterly Review and Mixed Race Literature. Her poems and prose poems have been published in Making More Waves, Tilting the Continent, Vietnam Dialogue Inside/Out and The Perfume River; and her essays in Nha Magazine and The New Face of Asian Pacific America. Her art installations were exhibited at SOMArts Cultural Center, Driftwood Gallery and SF State University. She is the founder and co-director and  of the Diasporic Vietnamese Artists Network (DVAN), an organization that promotes Vietnamese cultural productions in the Diaspora.

Kieu-Linh Caroline Valverde is Assistant Professor of Asian American Studies at UC Davis. She received her B.A. in Political Science and Ph.D. in Ethnic Studies at the University of California, Berkeley. Her teaching, research and organizing interests include: Southeast Asian American history and contemporary issues, mixed race and gender theories, Fashionology, Aesthetics, Diaspora, and Transnationalism Studies. She authored Transnationalizing Viet Nam: Community, Culture, and Politics in the Diaspora (Temple University Press 2012). This book explores the immense influence of the native and diasporic communities on each other in politics, culture, community, generations, gender relations, technology, news media, and the arts. Professor Valverde founded Viet Nam Women’s Forum (1996), a virtual community with over 300 women globally, and Our Voice (2008), a consortium of concerned Overseas Vietnamese that put forward ideas and action plans that best represent their communities and promote development globally (2008). Professor Valverde was a Luce Southeast Asian Studies Fellow at the Australian National University (2004), Rockefeller Fellow for Project Diaspora at the University of Massachusetts, Boston (2001-02), and a Fulbright Fellow in Viet Nam (1999). As a passionate advocate for the arts, she curated the exhibit Áo Dài: A Modern Design Coming of Age (2006) for the San Jose Museum of Quits and Textiles in partnership with Association for Viet Arts, and consults for the annual Áo Dài Festival held in San Jose (2011, 2012).

Viet Thanh Nguyen is an associate professor of English and American Studies and Ethnicity at the University of Southern California. He is the author of Race and Resistance: Literature and Politics in Asian America (Oxford University Press, 2002). His articles have appeared in numerous journals and books, including PMLA, American Literary History, Western American Literature, positions: east asia cultures critique, The New Centennial Review, Postmodern Culture, the Japanese Journal of American Studies, and Asian American Studies After Critical Mass. He is currently a fellow of the American Council of Learned Societies (2011-2012), and was a fellow at the Radcliffe Institute for Advanced Study at Harvard (2008-2009) as well as at the Fine Arts Work Center (2004-2005). He has also received residencies, fellowships, scholarships and grants from the Luce Foundation, the Mellon Foundation, the Asian Cultural Council, the James Irvine Foundation, the Huntington Library, the Djerassi Resident Artists Program, the Bread Loaf Writers’ Conference, Creative Capital and the Warhol Foundation. His short fiction has been published in Manoa, Best New American Voices 2007, A Stranger Among Us: Stories of Cross-Cultural Collision and Connection, Narrative Magazine, TriQuarterly, the Chicago Tribune, and Gulf Coast, where his story won the 2007 Fiction Prize. His writing has been translated into Korean, Vietnamese, Japanese, and Spanish, and he has given invited lectures in Korea, Japan, Taiwan, and Germany. He has finished a collection of short stories and is working on a comparative study of American and Vietnamese memories and representations of the American war in Viet Nam, focusing on the literary and visual arts. He also edits diaCRITICS (www.diacritics.org), a blog on Vietnamese and diasporic Vietnamese arts and culture.