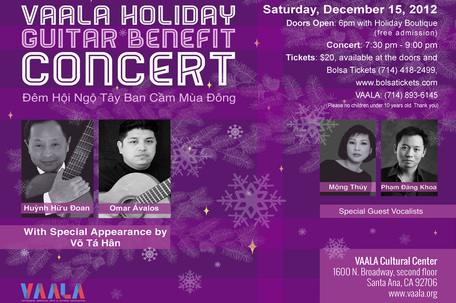 A holiday fundraising event has become an annual tradition for VAALA. This year’s event will be a benefit concert featuring guitarists Huỳnh Hữu Đoan and Omar Ávalos, along with guest vocalists Mộng Thủy and Phạm Đăng Khoa. The concert will also honor guitarist Võ Tá Hân for his contributions to music. Võ Tá Hân, an
acclaimed guitarist who has arranged over 50 Vietnamese songs for classical guitar, will make a special appearance at the concert. Doors will be open at 6:00pm with a Holiday Boutique (free admission) offering paintings, photos, vases, succulent pots, DVDs, books, and many more items that would make great Christmas gifts. The Holiday Boutique will remain open until the concert begins at 7:30pm.

About Võ Tá Hân
Võ Tá Hân has arranged over 50 Vietnamese popular songs for classical guitar. Võ Tá Hân studied classical guitar under master Dương Thiệu Tước at Saigon Conservatory since the early 1960’s. He founded and became president of classical guitar clubs in Singapore and Boston, and served on the jury board for many international guitar competitions. He has released 50 CDs featuring songs with lyrics from poetry, including 3 CDs of solo guitar music. In 1968, Võ Tá Hân left Vietnam to pursue his studies in Finance at Massachusetts Institute of Technology (MIT) and went on to work in Montreal, Toronto, and Manila, before moving to Singapore in 1981. He was a board member of the University of Administration and the Cultural House in Singapore. In 2010, he retired to Southern California.

About Huỳnh Hữu Đoan
Đoan recently celebrated his 40th year of guitar learning, teaching and performing. Having settled in the United States since 2000, classical guitar has remained a strong passion for Đoan. Đoan graduated from the Saigon Conservatory with the highest honor from the first guitar class at the university level in Vietnam in 1984. He has studied under masters Nguyễn Anh Tuấn, Lâm Cao Khoa, Dương Thiệu Tước. He co-founded the Vietnamese Guitarists Association in Southern California and also teaches guitar with the mission to promote classical guitar to enrich the Vietnamese American community. In 2010, Đoan released his CD album titled Cây Đàn Bỏ Quên (The Guitar I Left Behind).

About Omar Omar Ávalos
Ávalos is an Associate Music Instructor at Santa Ana College and a Principal Musician for the Department of Dance at University of California – Irvine (UCI). Omar has been active as a professional guitarist in the Los Angeles area for nearly 15 years. Omar received his Associate of Arts degree at Santa Ana College in 2001 and continued his music studies with a concentration in composition and received his Bachelor of Arts from California State University, Fullerton (CSUF) in 2005. In 2006, Omar traveled to Sevilla, Spain, where he studied Flamenco guitar. Omar is currently pursuing his Master of Arts in Musicology at CSUF. Besides performing guitar, Omar enjoys writing on his blog, The Santa Ana Sentinel.