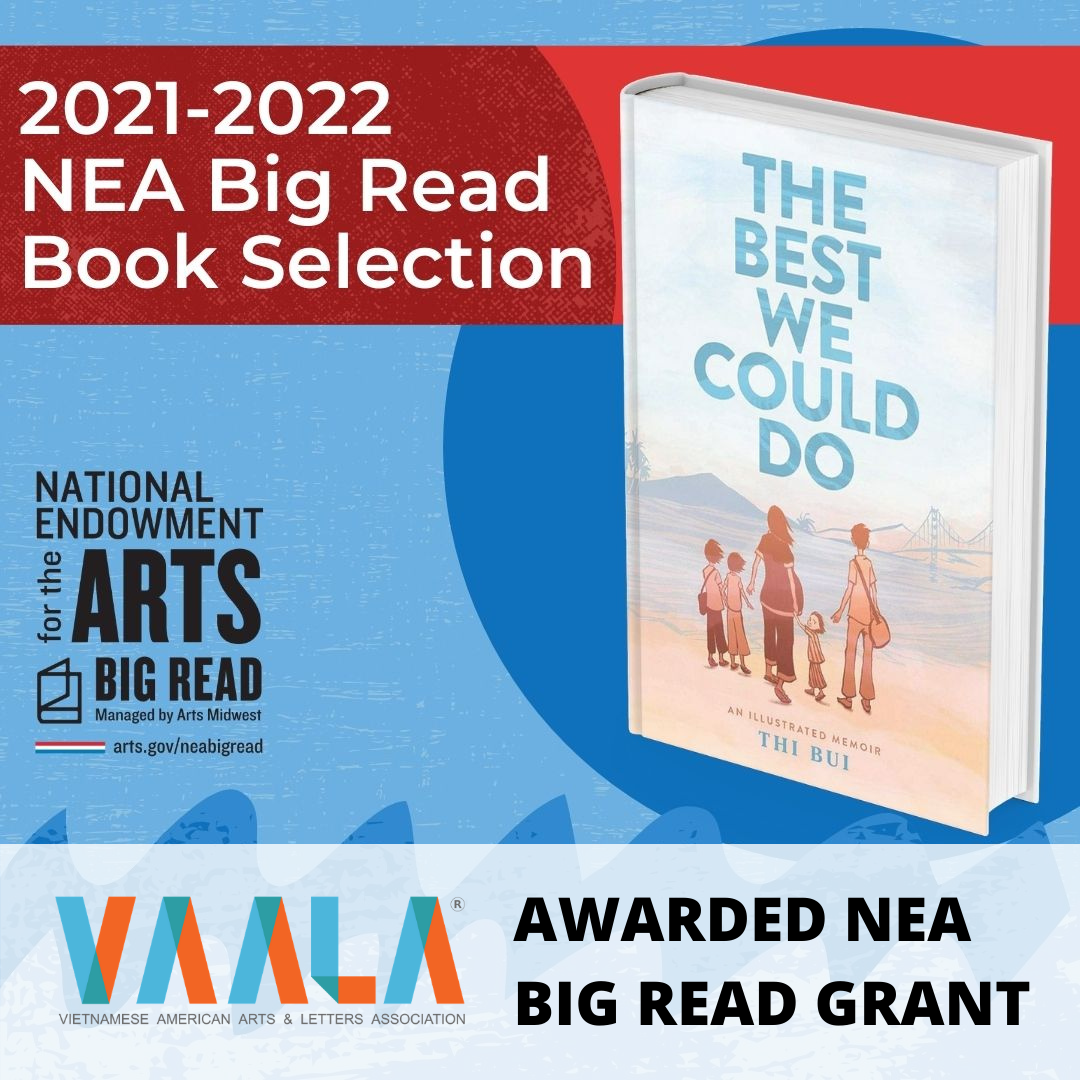 ORANGE COUNTY to Read and Celebrate “THE BEST WE COULD DO” BY THI BUI from September 2021 – June 2022, kicking off during Viet Film Fest 2021

June 15, 2021—Orange County, CA—Vietnamese American Arts & Letters Association (VAALA)  is one of 61 organizations nationwide selected to receive a 2021-2022 NEA Big Read grant. A grant of $20,000 will support a community reading program focusing on “The Best We Could Do” by THI Buifrom September 2021 through June 2022. An initiative of the National Endowment for the Arts in partnership with Arts Midwest, the NEA Big Read broadens our understanding of our world, our communities, and ourselves through the joy of sharing a good book.

Founded in 1991 by a group of Vietnamese American journalists, artists, and friends, the Vietnamese American Arts and Letters (VAALA) was formed to provide artistic self-expression among the newly resettled immigrant community in Orange County, California that had yet been established. What started as a group of dedicated volunteers has grown into a community-driven 501(c)(3) nonprofit organization. VAALA’s mission is to connect and enrich communities through Vietnamese arts and culture. Thanks to a diverse network of local artists, partnerships, and collaborations, VAALA has organized numerous cultural programs such as Viet Film Fest, the largest Vietnamese film festival outside of Vietnam, and Gallery Beyond Walls, a program consisting of workshops teaching technical art skills to the youth and providing a free and accessible art exhibition to the community.

Amidst the pandemic, VAALA launched its inaugural digital program, Viet Book Fest, to meet community needs in 2020. Viet Book Fest is a program that centers on Vietnamese authors and stories and showcases them to the community. In 2020, Viet Book Fest focused on identity, family, and community themes through children’s literature. The series culminated in a special appearance by Pulitzer-winning novelist Viet Thanh Nguyen and son, Ellison Nguyen, with Caldecott Honor winner Thi Bui and son, Hien Bui-Stafford, to present their co-created children’s book, “Chicken of the Sea.” Viet Book Fest in its inaugural year focusing on Vietnamese American children’s books drew 7,700 views on its virtual streaming platforms and was rated “Very Good” by 95% of attendees surveyed. Its impact was that it provided a space for children, who did not get a lot of social interaction during the pandemic, to come together for storytime.

Now Thi Bui’s illustrated memoir, “The Best We Could Do,” serves as the focus behind VAALA’s NEA Big Read programs. “The Best We Could Do” touches upon themes of home, family, parenthood, and belonging complicated by the intricacies of intergenerational trauma and historical memory. Bui provides a nuanced perspective on the repercussions of the Vietnam War and the silenced grief that continues to haunt refugee families. At the same time, Bui demonstrates the arduous attempts that come with reconciling such sorrow to create new possibilities for personal and familial healing. “The Best We Could Do” connects to VAALA’s multi-generational audience by diversifying narratives of the Vietnamese diaspora, and revitalizing larger immigrant identities and experiences beyond stereotypes. VAALA intends to host a variety of programs to reflect themes presented in Bui’s illustrated memoir from September 2021 through June 2022. Details to be announced upon the return of Viet Film Fest in October 2021.

“For 15 years the NEA Big Read has supported opportunities for communities to come together around a book, creating a shared experience that encourages openness and conversations around issues central to our lives,” said Ann Eilers, acting chairman of the National Endowment for the Arts. “We congratulate VAALA for receiving an NEA Big Read grant and look forward to a wide variety of meaningful community events.”

The NEA Big Read offers a range of titles that reflect many different voices and perspectives, aiming to inspire conversation and discovery. The main feature of the initiative is a grants program, managed by Arts Midwest, which annually supports dynamic community reading programs, each designed around a single NEA Big Read selection.

Similar themes within Bui’s “The Best We Could Do” can be found in VAALA’s current program, Viet Film Fest presents: “Under the Same Roof.” This virtual screening chronicles Viet Film Fest from its inception to its most recent iteration and offers a curated selection of short films that expand definitions of family to embrace change and understanding. “Under the Same Roof” has been enjoyed by audiences across the continental U.S. with global viewership in France, England, Germany, Vietnam, China, Thailand, Taiwan, Australia, India, and the Philippines. While based in Orange County, California, home to the largest population of Vietnamese Americans outside of Vietnam, the use of digital platforms has allowed VAALA to expand its reach and impact across generations, languages, and cultures. Due to popular demand, VAALA will be extending access to “Under the Same Roof” through the end of June 2021. VAALA welcomes audiences across the world to celebrate arts for community building while uplifting Vietnamese voices and stories. You can watch the shorts here.

“We’re inspired by the creativity of this year’s NEA Big Read grantees, who are finding new ways to bring people together after a challenging year,” said Torrie Allen, President & CEO of Arts Midwest. “We are proud to support these organizations and communities as they explore the richness and diversity of American history and culture together through reading.”

The books available for the 2021-2022 NEA Big Read explore different aspects of American history and culture. Grantees are developing programming that helps communities to reflect on where we’ve been, where we are today, and where we’re going.

Since 2006, the National Endowment for the Arts has funded more than 1,700 NEA Big Read programs, providing more than $23 million to organizations nationwide. In addition, Big Read activities have reached every Congressional district in the country. Over the past 15 years, grantees have leveraged more than $50 million in local funding to support their NEA Big Read programs. More than 5.7 million Americans have attended an NEA Big Read event, over 90,000 volunteers have participated at the local level, and over 40,000 community organizations have partnered to make NEA Big Read activities possible. For more information about the NEA Big Read, including book and author information, podcasts, and videos, visit arts.gov/neabigread.

About VAALA
Founded in 1991, the Vietnamese American Arts & Letters Association (VAALA) is a community-based, 501(c)(3) non-profit organization that seeks to connect and enrich communities through Vietnamese arts and culture. Join VAALA on Facebook, Instagram, Twitter, and YouTube.

About Viet Film Fest
Viet Film Fest was created in 2003 by the Vietnamese American Arts & Letters Association (VAALA), becoming its largest program. As the largest international Vietnamese film festival of its kind in the world, Viet Film Fest showcases the best creative work by and about Vietnamese people. Through the universal language of film, Viet Film Fest brings together multiple perspectives to expand the scope and horizons of Vietnamese cinema. Our award-winning films have been screened in numerous cities and countries. For over a decade, the festival has attracted thousands of national and international attention for its stunning showcase of shorts and features submitted from all over the world. As the hub of the Vietnamese movie industry, the festival hosts networking opportunities with prominent directors, media experts, and producers, including Tran Anh Hung (The Scent of Green Papaya), Tony Bui (Three Seasons), Ham Tran (Journey from the Fall), Victor Vu (Yellow Flowers on the Green Grass), Ngo Thanh Van (Furie), and Charlie Nguyen (The Rebel). Join Viet Film Fest on Facebook and Instagram.

About National Endowment for the Arts
Established by Congress in 1965, the National Endowment for the Arts is the independent federal agency whose funding and support give Americans the opportunity to participate in the arts, exercise their imaginations, and develop their creative capacities. Through partnerships with state arts agencies, local leaders, other federal agencies, and the philanthropic sector, the Arts Endowment supports arts learning, affirms and celebrates America’s rich and diverse cultural heritage, and extends its work to promote equal access to the arts in every community across America. Visit arts.gov to learn more.